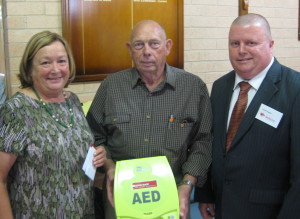 To apply for a grant at your school in regional NSW or QLD, click here to view the Here for Hearts program….

Friday 28 February 2013 will be etched in the minds of many who were at Cathedral School in Bathurst to pick up their children at the end of the school day. Unlike any other school day, this was to be a different day for Mr Ted Summerfield and many at the school. Waiting to collect his grandson, Mr Summerfield suffered a Sudden Cardiac Arrest. Luckily, there were six first aiders there to immediately deliver life saving CPR and defibrillation.

The school became a Heart Safe school months earlier when the decision was made to purchase a ZOLL AED Plus defibrillator from the Defibshop. The school had actually been prompted to buy the defib when a student was identified as having an existing cardiac condition. Defibshop Managing Director Mr Carpet Hughes had discussed the most likely use for the defibrillator with school principal Mr Patrick Allen, saying it would most likely be used on a staff member or a grand parent. That statement came true on the 28 February!

Mr Summerfield, 71, survived his Sudden Cardiac Arrest and was transferred to RPA in Sydney, where a pacemaker was implanted into his chest. His survival was recognised with a presentation at the school on Thursday 5 December 2013. In attendance was Mr & Mrs Summerfield, the six first aiders who worked on Mr Summerfield and the attending NSW Ambulance paramedics who attended, treated and transported Mr Summerfield to Bathurst Hospital. Ironically, Mr Summerfield was released from RPA on the day of his 50th wedding anniversary!

Mr Summerfield was also presented with a ZOLL wrist watch by Defibshop Managing Director Mr Carpet Hughes. Mr Hughes addressed the crowd saying Sudden Cardiac Arrest not only affects the victim, but those many relatives and friends of the victim too. Mrs Summerfield thanked Carpet for travelling to Bathurst for the presentation. During their chat over the afternoon, Mr Hughes told Mrs Summerfield that the passion for the Defibshop to get defibrillators into our communities comes from survival stories such as Mr Summerfields.

Mr Hughes attended the presentation as part of your Defibshop’s ongoing commitment to customer care. Our service, commitment and ongoing relationship doesn’t end with the delivery of your defibrillator, but is an ongoing partnership in making sure we strive to make our communities a Heart Safe environment. When discussing the use of the ZOLL AED Plus for the Sudden Cardiac Arrest, several of Mr Summerfields rescuers said the ZOLL AED Plus was ‘easy to use’ and ‘worked like clock work!’. This is testament to the ease with which such units are operated, guiding you fully through any Sudden Cardiac Arrest. If you have any questions about defibrillators, defibrillation or Sudden Cardiac Arrest, call your Defibshop now on 1300 729 575, or contact us via email. 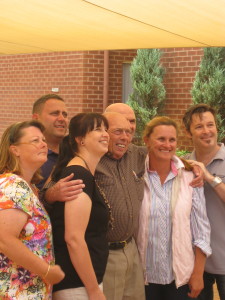 Mr Summerfield celebrates with his rescuers! 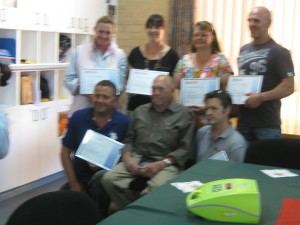 Local media were in attendance for the presentation. Click here to see the article by Jacinta Carroll in the Western Daily newspaper. 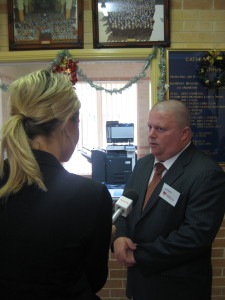 Defibshop Mr Carpet Hughes presents to the media about the importance of having defibrillators in the community.